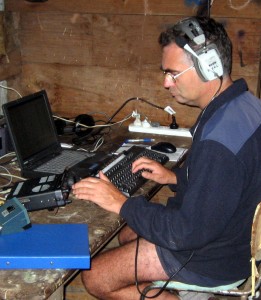 The election of John Shaw, ZL1BYZ as the 8th inductee to the NZ DX Hall of Fame recognizes his extraordinary abilities as a contester and DXer. Licensed in 1983, John has proven to be a prolific contest operator with nearly 70% of his operations on CW. He usually places highly in major international contests and generates enormous pileups when he operates from his Pukekohe farm. John was a member of the ZL6QH contest group, ZL7T DXpedition, ZL6LH Light House team and a long time active member of the Papakura Radio Club. He has recently joined the ZM4T East Coast Contesters in Napier and joins us whenever he is able to get away from his farm.

He has won the Doug Gorman Frequency measuring contest and numerous Jock White Field Day contests. He was recently made a member of the ARRL A-1 Operators Club. John will be joining the ARRL DXCC Club soon with an initial entry of over 300 countries. He contributes much to the sport of Amateur Radio Contesting and DXing in New Zealand. 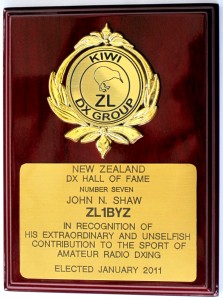 We wish John well in the future and hope that he will enjoy having the NZ DX HoF award plaque on his shack wall.

Regularly the source of a pile-up and works DX for DX…  not for John.

QSL cars are delivered to the Papakura Radio Club where John is a long standing member. Many of us collect up to 10 cards at a time…. John walks out to his car with his forearm full from elbow to finger tips and the remainder in his other hand…. cards are collected monthly!

Worked and won Doug Gorman Frequency Measuring Contest as competitor and as a team member of Papakura Radio Club for the branch award.

One of the ZL6LH International Lighthouse and Lightship weekend team since start in 1998.  Takes the bait of the on line log challenge of DXpeditions (like many of us!). Worked on JWMFD contests as team member, solo operator and been on top or towards the top of that section every time.

In considering equipment, John does so much research, if he bought it… so would I! This was the case with DX4Win and Writelog.