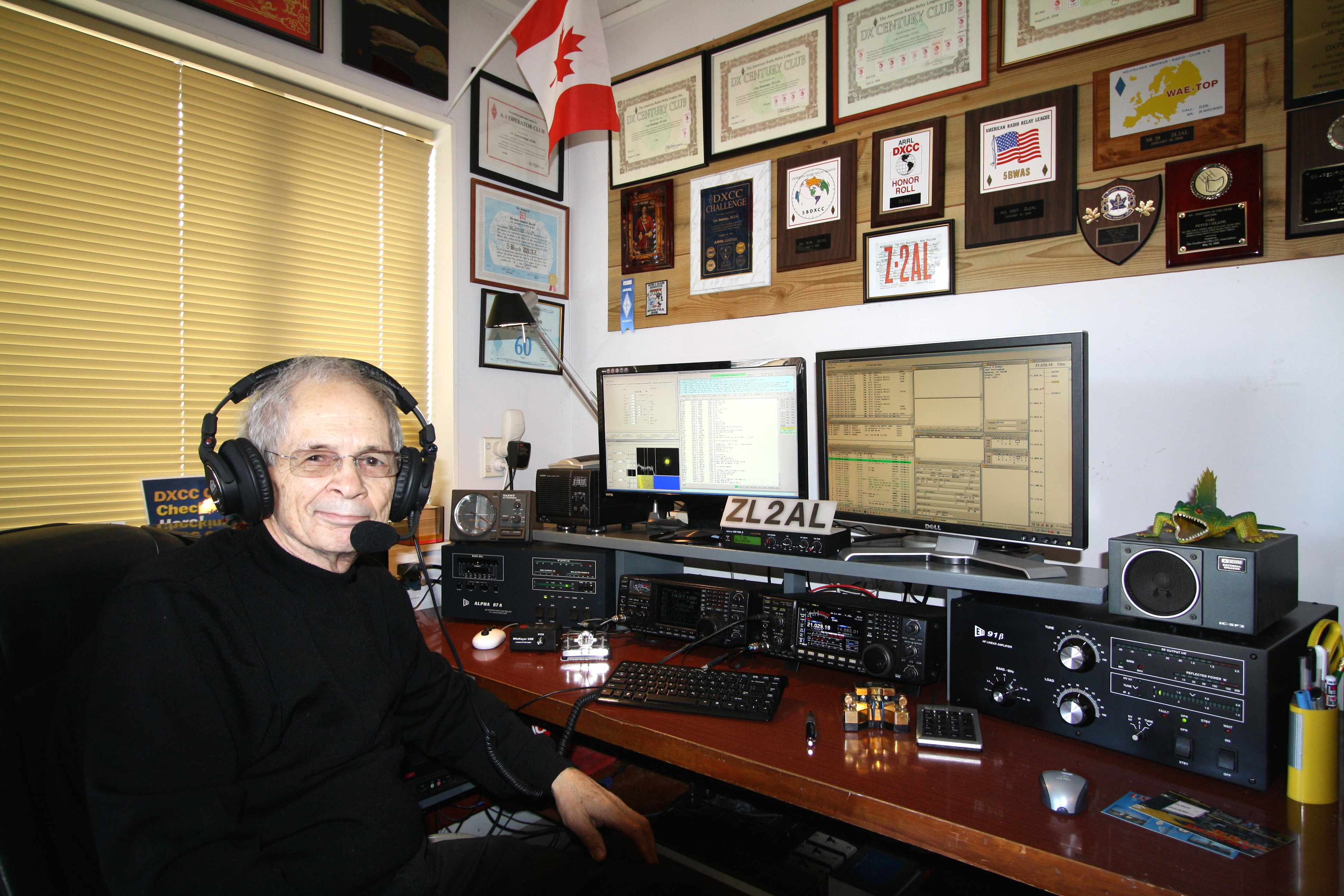 When I came to NZ in late 1969 I was issued with ZL1BET. I lived at Murupara in the Ureweras and had other things on my mind than Ham radio so did little operating until I moved to Palmerston North and New Plymouth a few years later. I was issued ZL2AL in 1972. 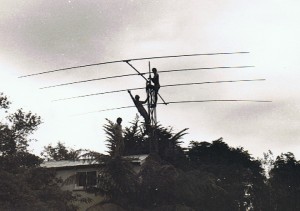 New Plymouth was interesting in that my wife and I had acquired a property in a valley looking out to the sea. I erected a W8JK array (six half waves in phase) on 80 metres across the valley. It was an excellent performer on 80 metres but was only up 18 months as the Education Department moved me once again. This time to Hastings in Hawke’s Bay until we moved to Napier in 2005. It has to be one of the best places in the world in which to live and operate ham radio. Those of you who have traveled overseas lately will know what I mean. 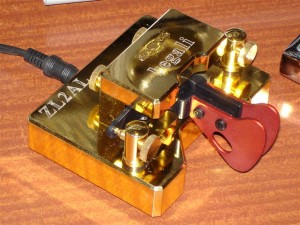 Currently, the equipment at ZL2AL currently consists of an Icom 7600, Icom IC756 PRO3, IC746Pro, Alpha 87A, Alpha 91b, Tokyo High Power THP 1.2FX, amplifiers. Antennas include a 5 Band homebrew copy of the Force 12 C3S for HF, Slopers, Verticals and Dipoles for LF. I work both SSB and CW (CW about 80%) but prefer CW. I love gadgets and have a K1EL, Logikey and Microham 11 electronic keyers for CW. Paddles include Bencher, Vibroplex and a gold plated Begali Signature paddle which is a joy to use and my favourite. I nearly always use a Heil Proset with HC5 cartridge as it suits my voice. Lately, I have been using a Dave Clark Headset. I removed the original audio pieces and replaced them with the Heil earpieces and HC-5 microphone cartridge. 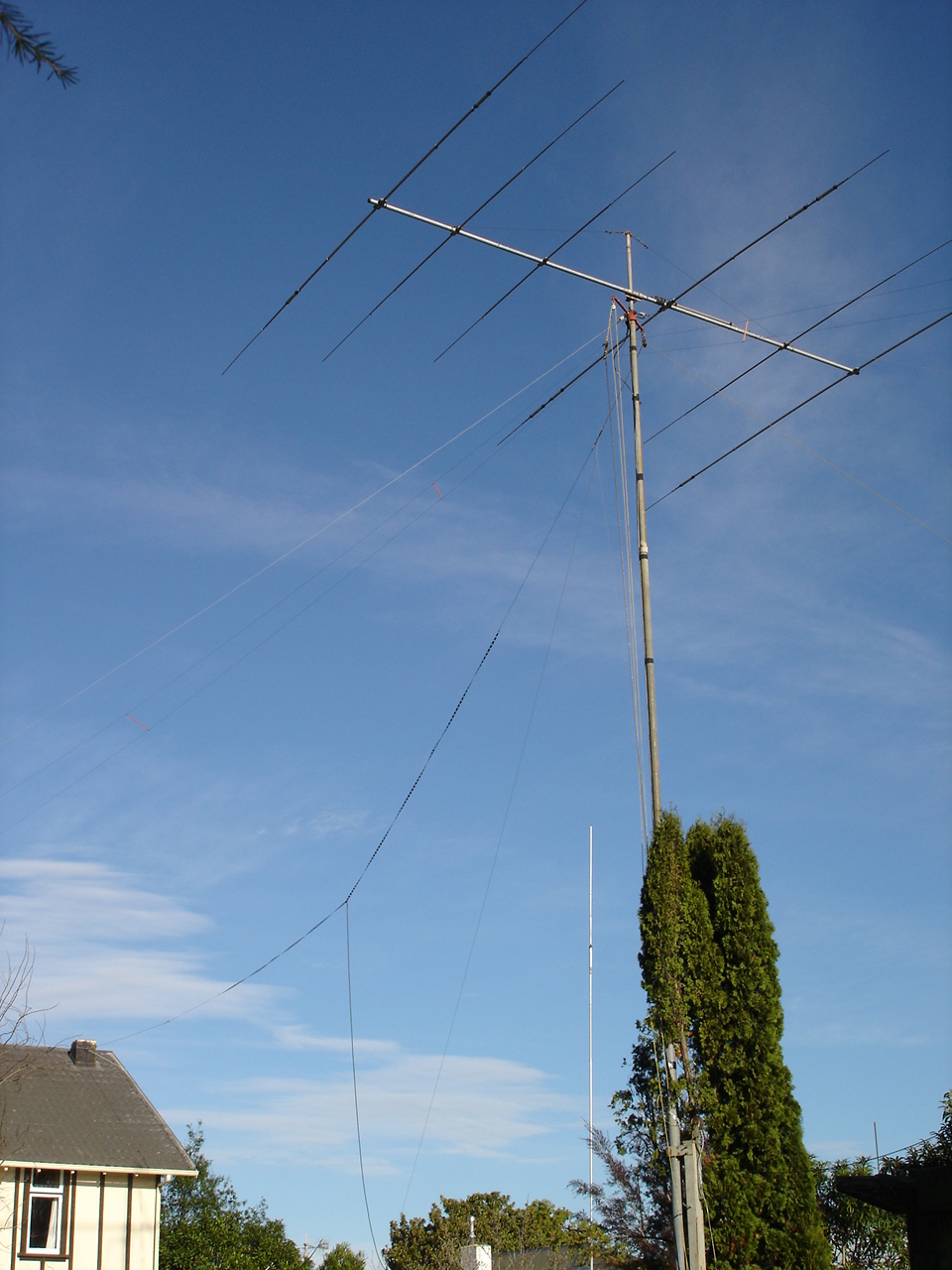 This was my TH6DXX I had up at my last location in Hastings for over 30 years. It was on a homebrew rotating mast.

Antennas are the backbone of any amateur radio station. You cannot expect to achieve great results with a few small lengths of wire strung out on a pole 5 metres high. Minimal antennas do work but they also produce minimal results. I had a TH6DXX Tribander up 20 metres for many years when we lived in Hastings and it produced great results in working almost every country in the world. 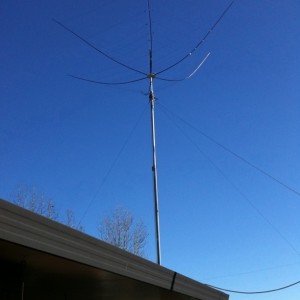 We moved to Napier in 2005 and I used wire antennas for a while until I was able to put up a 5 band Hex Beam. It works very well indeed for what it is. An 11 metre extendible mast was fabricated and anchored to our outside area roof. I also hung an 80/40 metre trap dipole and a 30M full wave loop from the top of the mast to give me additional capability for those bands.

Update: It is now 2 years later and the HexBeam has been hit by several windstorms and it hangs in tatters as as you can see from the photograph below. My intention is to finish off my homebrew copy of a Force 12 C3S 6EL Tribander and get it up on the tower by April, 2014 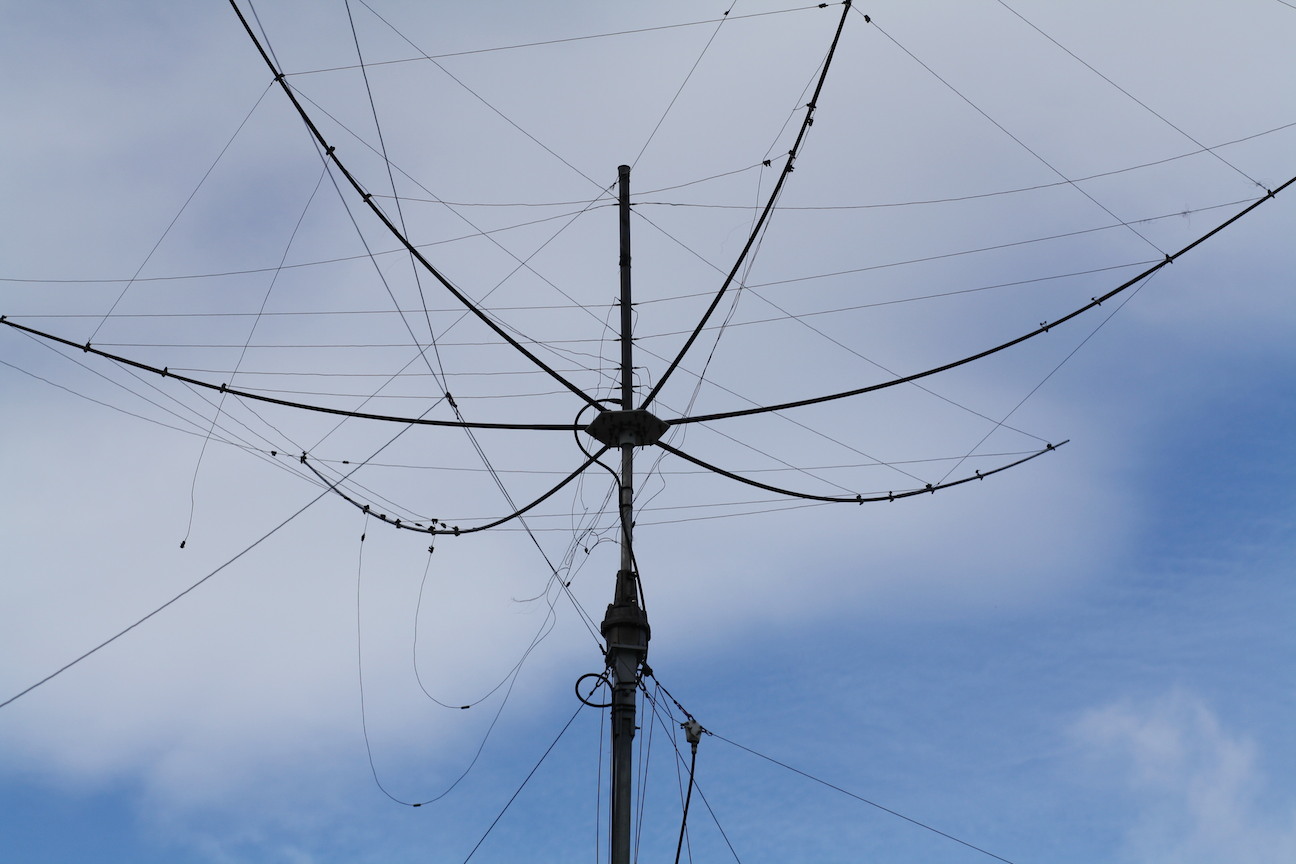 The Hexbeam 2 years later. Sadly, many element wires have separated from the spreaders 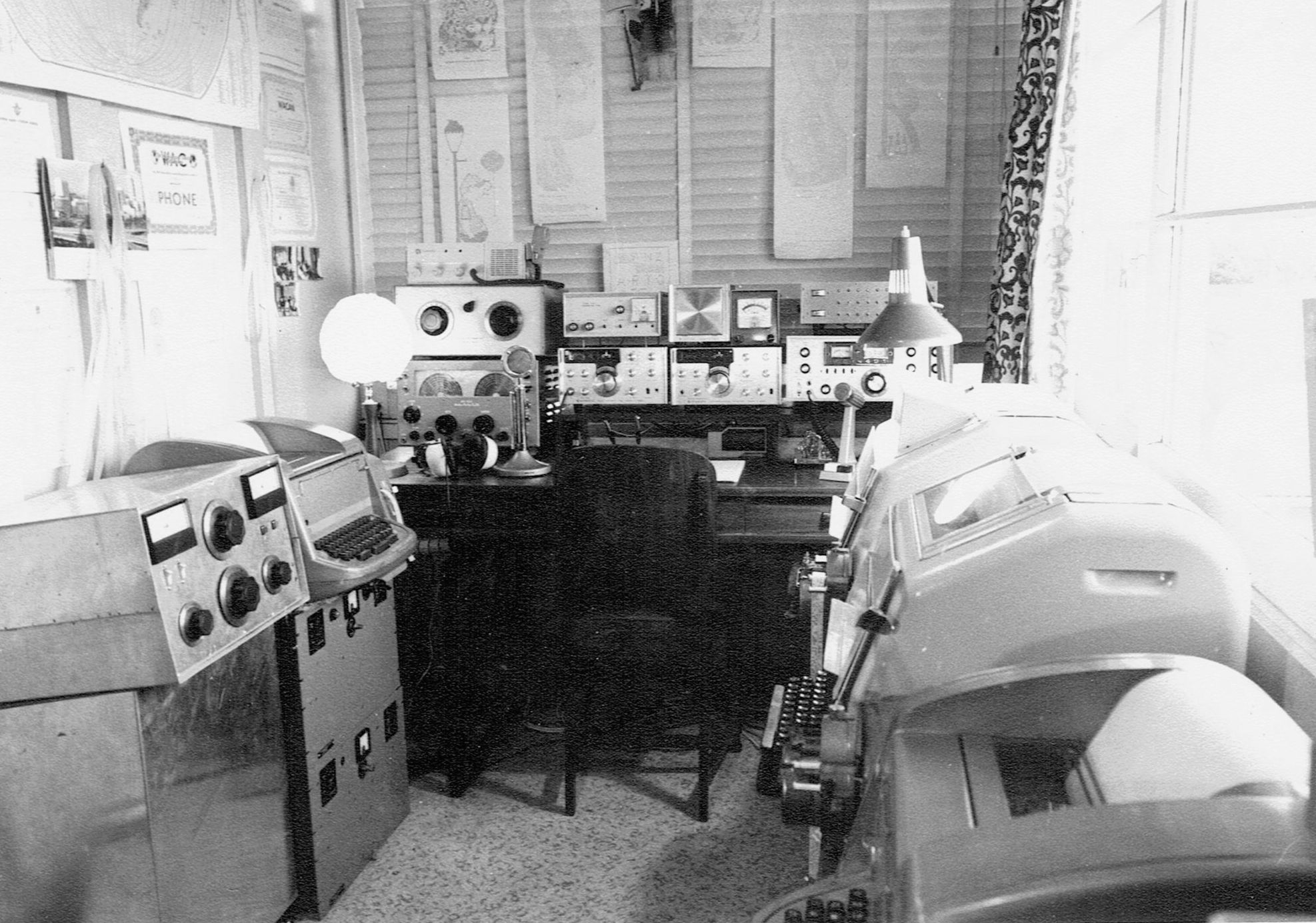 ZL2AL 1981 – Kenwood gear and Homebrew KW amp. RTTY machines were Model 15s and a Creed 7B. The receiver on the left of the desk is a commercial Japanese Anritsu.

We moved to Hawke’s Bay in 1976 and settled in Hastings. The shack looked like this by 1981. I was still involved with RTTY and the station consisted of a Kenwood R599 – T599   Receiver and Transmitter. There was also an FTDX401 Transceiver which I never really found to be reliable. There were a large number of RTTY operators on the air around ZL at that time. We operated at SelCal system on 3545 Khz and I could leave messages on unattended machines. It was all the very latest technology in 1981! The growth of the computer revolution rendered a lot of our things in society obsolete within a few years and that revolution still goes on. 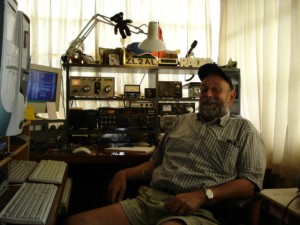 During 2004, my friend Ted Minchin ZL1MT came down to visit me in Hastings. Both Ted and I had been battling non-Hodgkins Lymphoma for a few years and had similar stories to tell about the awful chemotherapy treatments that we had to endure. This photo of him that day was taken a few months before he succumbed to the disease and became a SK.

ZL2AL of that period was operating a Kenwood TS-940 and a TL922 amplifiers. The antenna was a 204BA up a 20 metre mast. Computer logging and VHF Packet connections were the order of the day. About this time I began to use computer logging with a rather primitive DOS program written by Dave WJ2O. From 1972 through to 1992 there was about 17,000 QSOs in my paper logbooks. I decided to put all of them into the electronic logging system while adding in new contacts. One page at a time took me nearly a year. That old DOS program gave way to the DX4Win logger which I have used ever since in it’s various versions. Although I have tried many other loggers, I still keep coming back to DX4Win and it’s latest version 8.05 is still in use.There are over 53,000 contacts in my logbook in 2014. The ZL2AL shack looked like this in 1993 (below). The computer monitors are quite a laugh now but they were state of the art then. 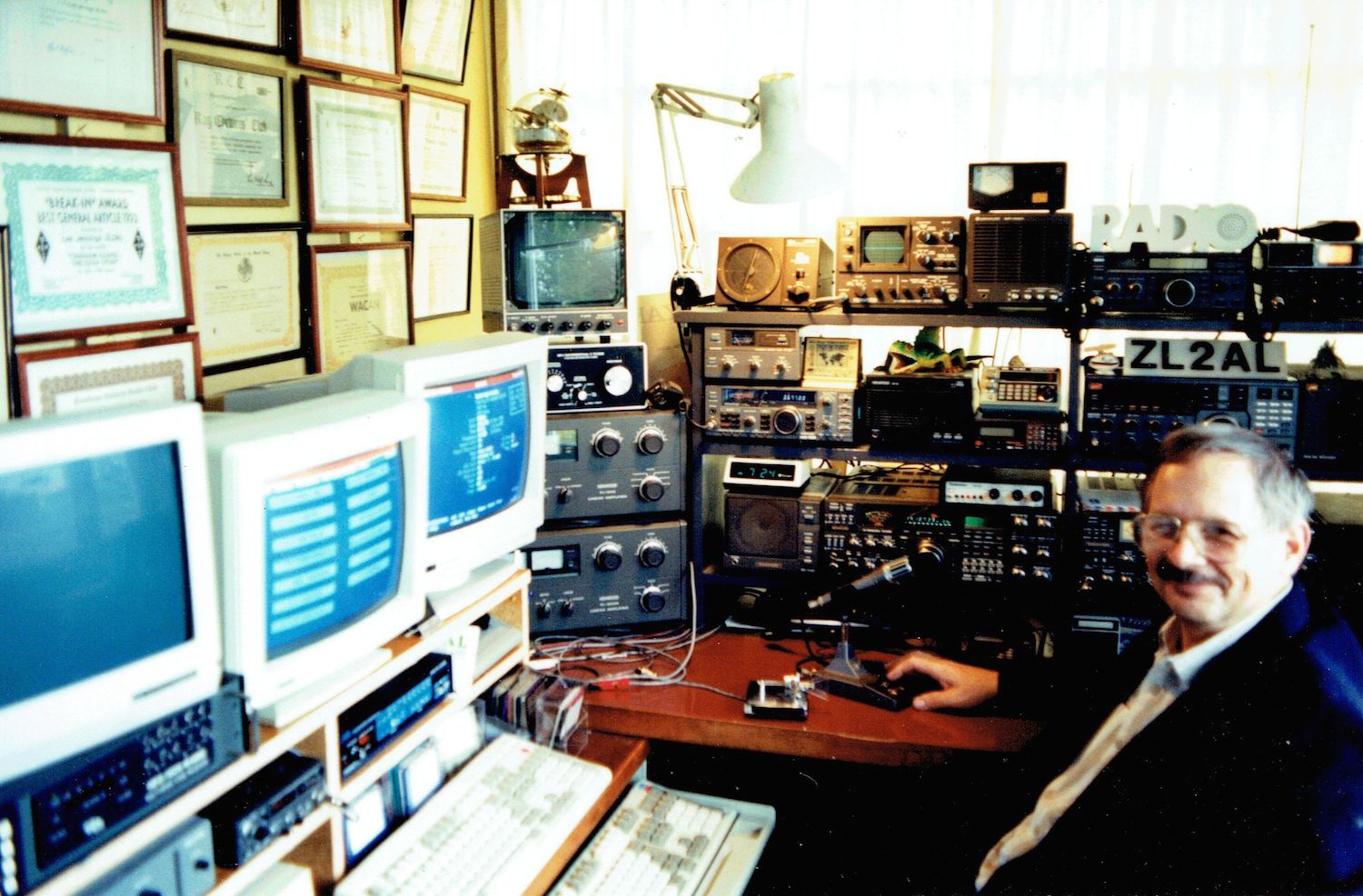 By 1993, I was still using Kenwood equipment. TS-930s and TS940s were the top of the line in those days and they were brilliant radios to operate. Sadly, as they got older the display boards would fail and the final amplifiers would fail resulting in burned up phenolic circuit boards. Around this time Yaesu were marketing their FT1000Ds and they were the toast of the DX world. Within a few years, Kenwood were pushed out of the market by clever Yaesu. 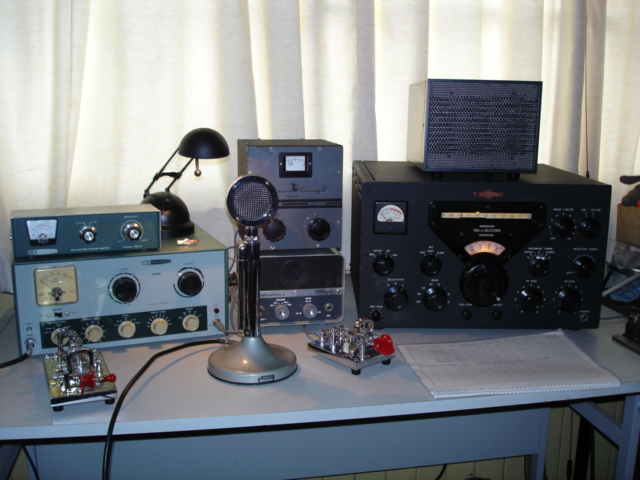 I became interested in restoring old radio gear (Boat Anchors) in the late 1990s and acquired a Collins 75A4 and Heathkit DX60B Transmitter with a Johnson 122 VFO. It took me back into the 1950s when I had the same equipment operating in my Dad’s flat above his shop on Mt. Pleasant Road in north Toronto. I strung a 40M dipole on the flat roof which was about 10 feet above my head on the roof. The antenna worked well but I had a lot of RF problems in the shack. The photo is of the gear that I restored and used for a while. It was fun but it made me realize what amazing advances that manufacturers have made in the development of amateur radio equipment over the past 60 years!

The Collins S-Line above is another “Basket case” that came my way. I spent a lot of hours restoring it to like new condition. Funny thing about these old radios. They are nostalgic for sure but when you try to operate them, it soon becomes apparent how the latest technology in radios is so much more reliable and functional to operate. Modern radios integrate into computers and the wider world of the internet to give us the fast paced hobby we have today. 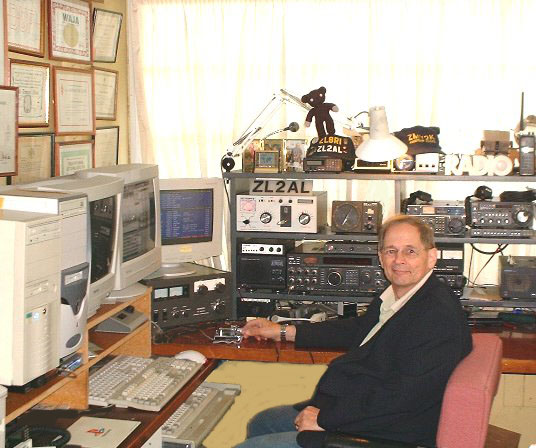 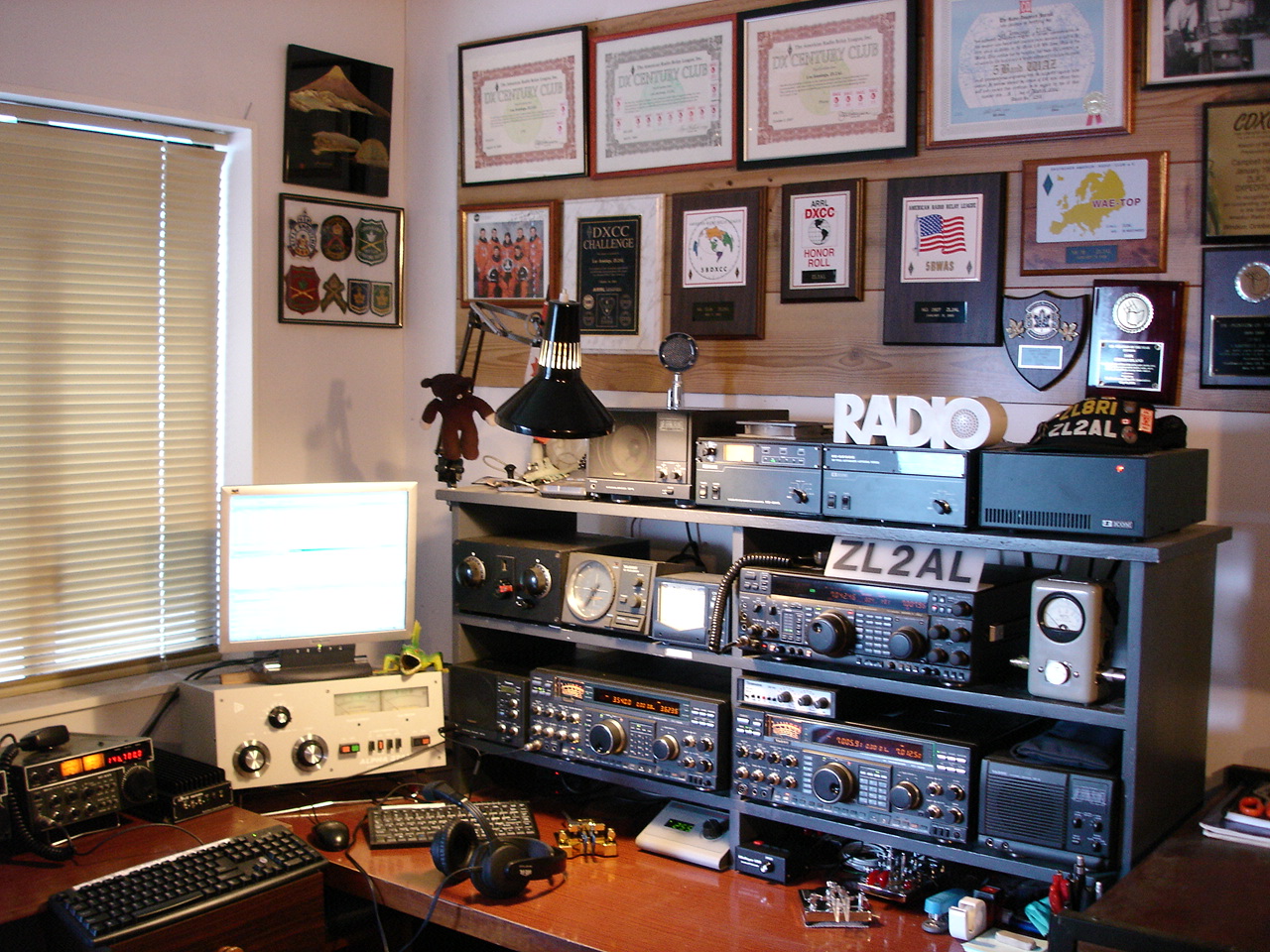 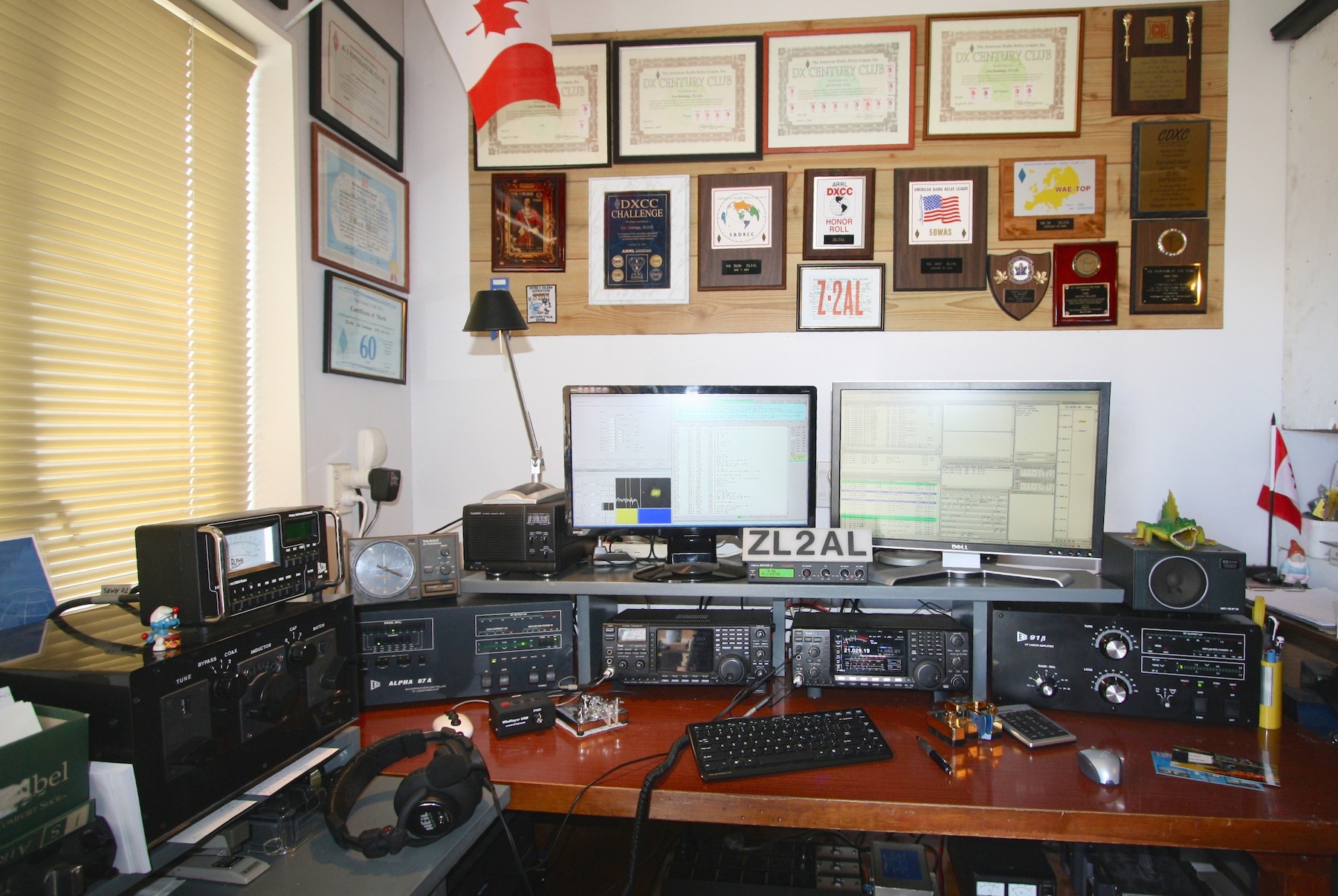 ZL2AL November, 2014. State of the art Icom radios with Alpha Amplifiers. Computer logging with DX4Win, direct feed information from the internet combined with instant bandswitching to any HF frequency and a good antenna gives me a “Dream” radio shack. It’s a far cry from the my shack in 1953! 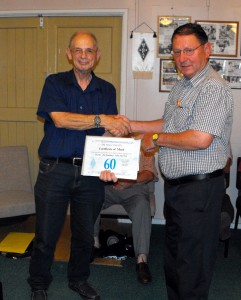 The photo at the left is of me receiving a 60 Year Old Timers Certificate from the NZART in April 2013. I can hardly believe it has been that long since I first called CQ. Amateur radio has changed so much over that time. I have seen the change from tubes to transistors to integrated circuits to microprocessors. Radio equipment has become so much more sophisticated. Amateurs have integrated their equipment and styles of operating into the the internet. Our hobby has always been about communication with other people all over the world. Nothing has changed in that respect. The only fundamental change that didn’t happen was technology to shorten the size of half wave antennas. In amateur radio; bigger is better!!! 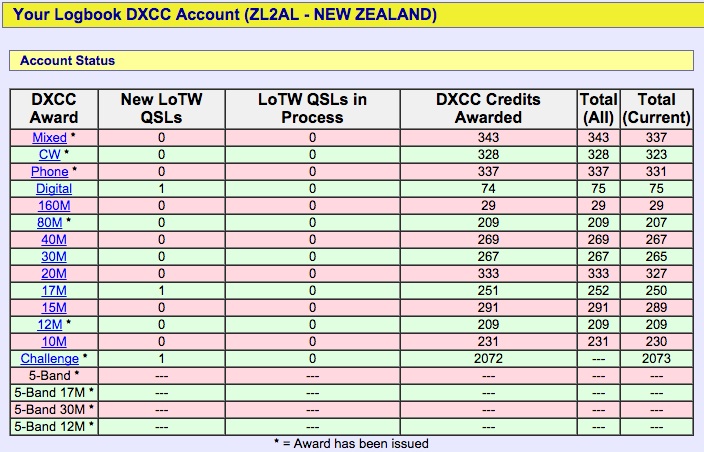 I actively look for DX on a daily basis and I have to admit it gets harder to work “new ones” every year. With Honour Roll (Mixed) completed, Honour Roll on Phone was completed in September 2014.  I need 2 more to have worked all 340 entities (2015 list) and achieve No.1 Honour Roll Award. I am slowly working toward the DXCC Challenge 2500 I still have 2 more Zones to work for the 5BWAZ plaque. Completing these challenges is a bit like collecting a full set of stamps from a large country that issues a lot of stamps over a lot of years. Very few stamp collectors ever do it but the challenge is always there. The chart above shows my totals listed on the DXCC Logbook of the World in March 2014

I am happy to sked any time, any band, any mode and I do QSL 100% either Direct or via the Buro. 57,500 QSOs have been uploaded to LoTW and Clublog from 1974 until present day and you can always check my online log at DX.QSL.NET

The worst Day of DXing is infinitely better than the best day working!