Mileage may vary but this is how I modified my SB-220 for use during major contests. Basically you don’t need a “big bang” in the middle of a ferocious run on 20M. If you have a catastrophe, either by inexperienced ops working with gear that has the potential to take out power panels or an amplifier spontaneously does a nasty and fills the air with ozone and lightning, you need circuitry that will sustain only minor damage which may be repaired and put back into service quickly.

WARNING!!!!!!! Before you undertake any modifications you must know that under 100 VDC will kill you easily. Big amplifiers such as the Heath SB-220 generate extremely lethal DC in excess of 3000 Volts DC Mess with it and you will not survive! Do not work on your amplifier with it plugged in. Do not work on your amplifier if you are tired or are not thinking clearly. The procedure each time you make a change is to:

2)      Look at the HV meter and watch it slowly discharge to zero.

The series of photographs will show you what I have done. Basically the improvements are: 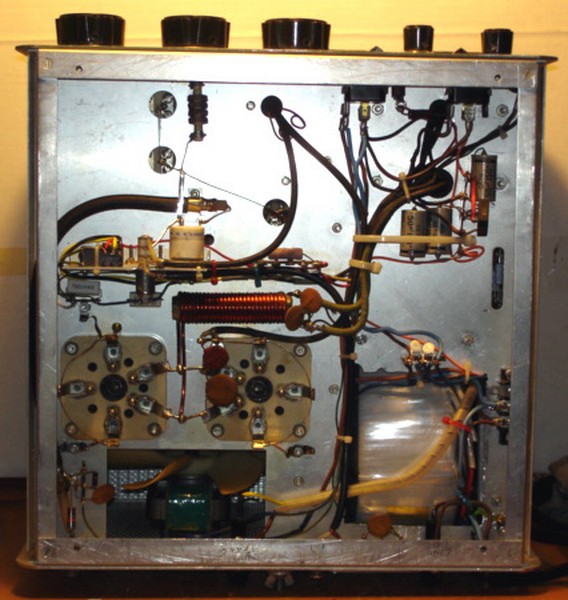 2)      Remove the antenna switching relay, mount it near the circuit breakers and rewire it as a “Step Start” relay to bring the voltage up on the filter capacitors slowly, limiting inrush current and protecting the main power switch along with the power supply components. 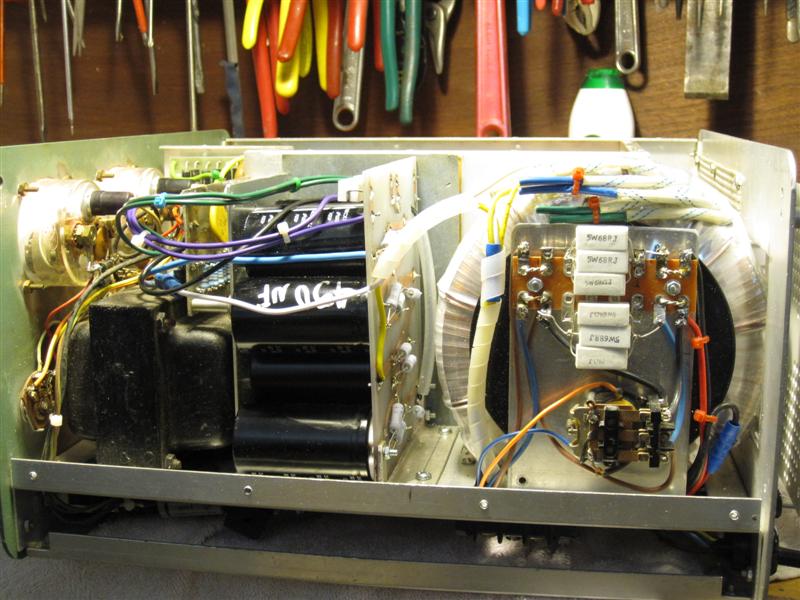 3)      Install three new 26VDC relays near the cathode choke. There are in series with a 680 ohm dropping resistor to reduce the 120VDC bias supply voltage to around 75 VDC for the chain. I used equalizing resistors across tow of the three relays and total current drawn is 85 ma which is acceptable for most Yaesu and Icom radios. Two of the relays are Jennings RJ series available from Maxgain systems and the third small reed relay switches the 120VDC bias to the filament/cathode on standby. 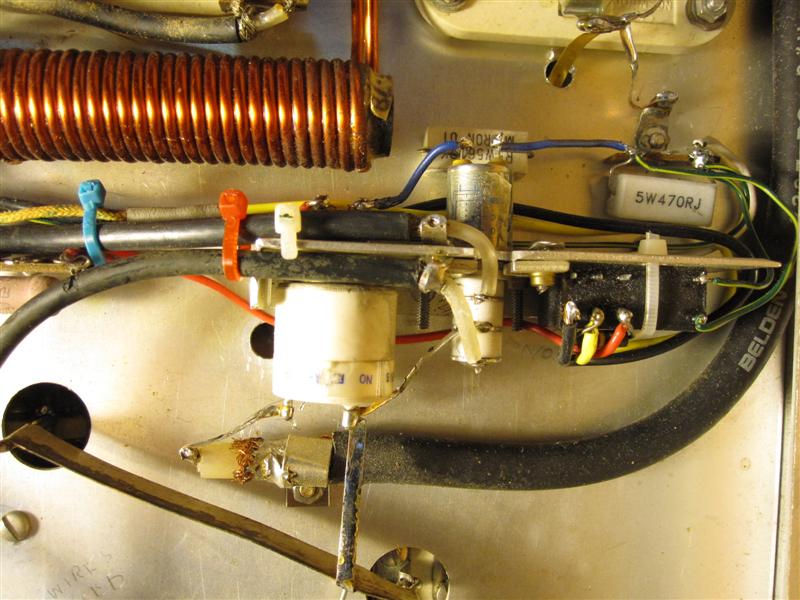 4)      Power supply improvements include removing the 30K resistors across the filter capacitors and   replacing with 68K 5 watt wire wound resistors to reduce heat near the capacitors. I replaced the original diodes with 1N5408 3A diodes. I removed the original Zener diode and replaced it with a series of seven 1N5408s.

5)      I removed the RF network at the grids and grounded each grid together and to the chassis. 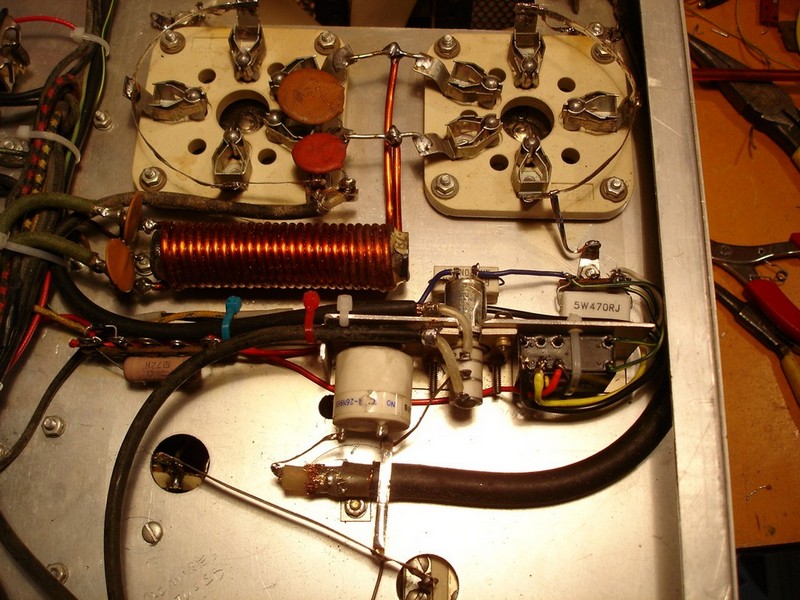 6)      I removed the metal rod between the HV feedthrough insulator and the RFC feeding the main RF choke and substituted a junkbox surplus steatite insulator and placed a couple of fuse clips across it which allowed me to insert a 1A fuse in the B+ supply to the plates.

All in all a very satisfying project and well worth while. I haven’t really noticed much difference in the amplifier’s operation except that the tuning each side of resonance is equal and smooth. It is nice to know that the amplifier is protected and will be more reliable under 48 hour contest operation.

I was using my old SB220 during the CQWW last year and there was a helluva bang accompanied by a bright flash followed by the sickly sweet odour of transformer gunk liquidizing. I put amp on the shelf for a few months and was in complete denial trying to justify that it was just an old electrolytic gone west. It wasn’t. A good mate of mine stripped down the old transformer and we were planning on rewinding it when I ran across a company in the USA (Antek Inc.)  marketing a line very large toroidal wound HV transformers. 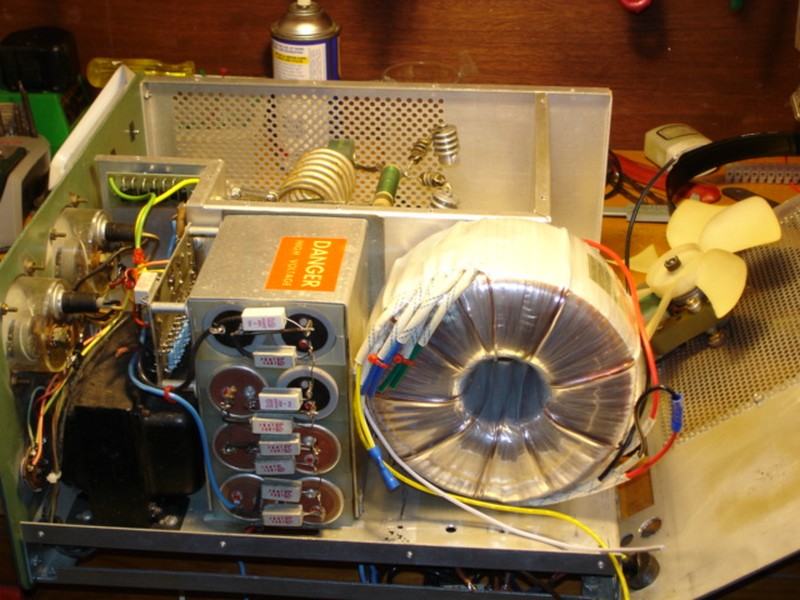 The transformer arrived and of course it was just slightly LARGER than the cavity. Since the amp has been extensively reworked with vacuum relay switching etc, I had nothing to lose and decided to take my 4” grinder and mount the big 20 lb toroid into the chassis with a bit sticking out the back which will be covered with a safety cover plate. I mounted the new “Step Start” relay and resistors on the side of the toroid as you see in the photos. 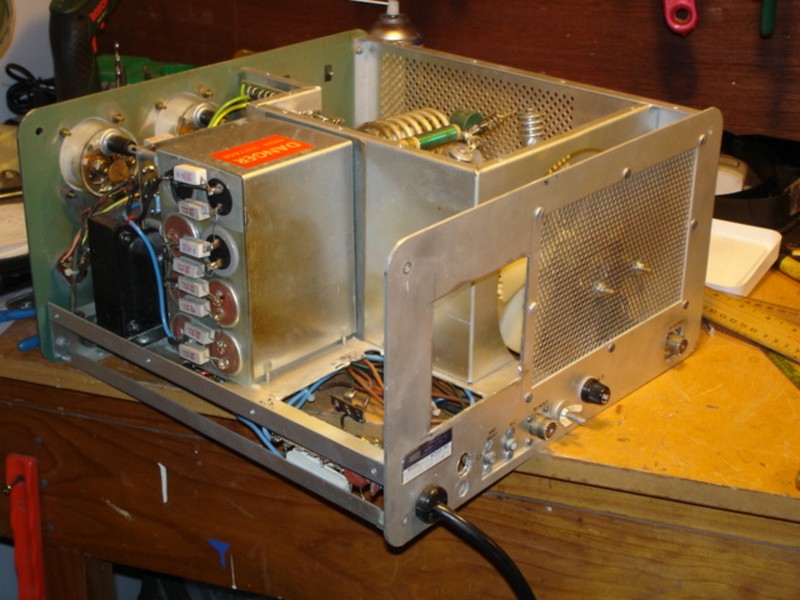 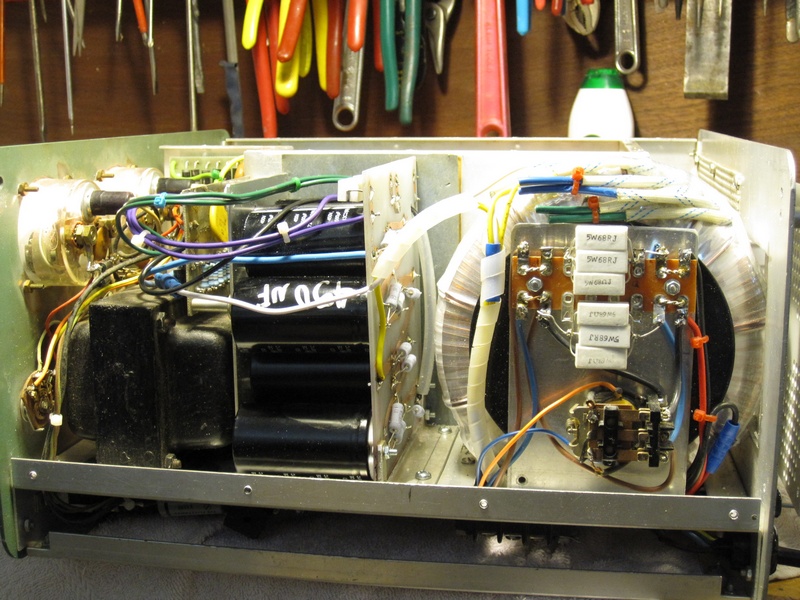 Since the CW/SSB switch became redundant, I changed the circuitry so that it is a Standby/Operate switch that kills the HV. (Yes, I know it’s not needed as the 3-500s are instant on, but it’s better than leaving it there doing nothing.)

Some of the other circuitry improvements have been to get rid of all the garbage grid circuitry and ground them direct, Vacuum relay antenna switching for QSK, Step start power up (using the old antenna relay!) removing the ALC circuitry, installing two new replaceable fuse holders on the back panel, one as a line input fuse at 7A and the other as a “glitch fuse” of 1.0 amps in the secondary of the HV transformer. (yes I know it’s a bit dicey but it works fine)

It has been a very interesting project and the final result is an amp that will put over a kilowatt into the antenna with a plate current of around 500 ma and the transformer runs very cool. The higher voltage on the plates required that I increase the resting bias a bit up to nearly 10 volts and the resting plate current is 150 ma. 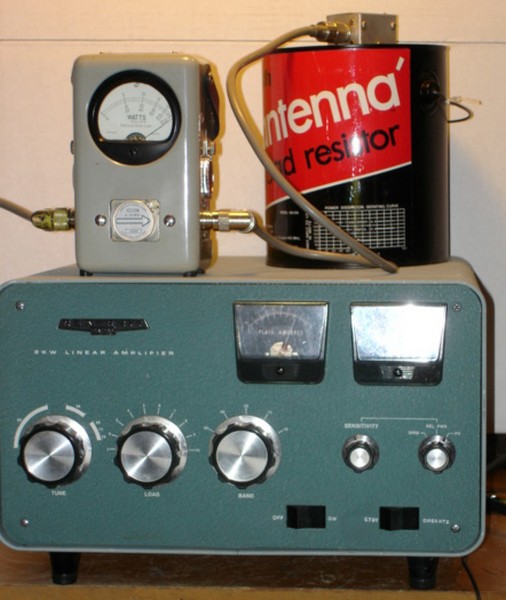 It will actually put about 1400 watts into the antenna but that it a long way past the capabilities of the band switch and variable capacitors so running it at around 900 to 1000 watts seems to sit well with it.