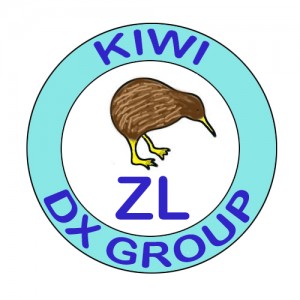 The Kiwi DX Group is a group of avid DXers that formed in the late 1990s. The logo originated from the magazine NZDXR edited by ZL2AL. Although the magazine ceased publication after nearly 5 years, the bond was formed and Kiwi DXers became a formidable group in the pileups.  ZLs are quick to support DXpeditions and a recent “pass the hat” exercise saw the ZLs raise a considerable amount of money to become a sponsor and support the upcoming FT5ZM Amsterdam Island DXpedition 2014