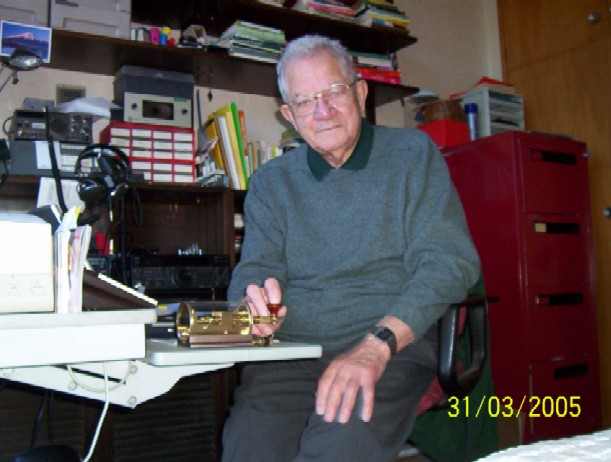 My involvement in amateur radio is relatively recent, as I obtained my licence in September 1990. However, my interest and involvement in radio dates back to the 1920s. as a nipper, assisting my father who constructed our first radio, by blowing on the solder to assist its cooling. Our first radio I recall had plug in coils, The set was powered by a large dry battery. There was no electricity reticulation in our village,

My interest also involved constructing crystal sets. We got good reception as theLondontransmitters were only about 10 miles distant from where we were living. I developed into producing valve receivers and my piece-de-resistance was a three-valve short wave receiver that gave me a lot of satisfaction. the friendly guys at the local radio shop, let me browse through heaps of discarded components. Among the many QSL cards I received were one from the GE Company station inSchenectady,NYand another from the Australian station VK2ME with its unique kookaburra interval signal.

I went to sea at age 15 as a deck apprentice in Shell Company tankers. I used to spend a lot of my spare time at sea talking to the radio operator who was in constant touch with Portishead Radio wherever we were. A few months after I started my career, as a mariner, the war started and we were not allowed to operate receivers at sea, so could only listen when in port.

I came to New Zealandshortly after the war and served in several of the Union Company’s vessels. We trained in the Union Company’s own school and the instructor was Frank Graham. We trained to pass the 3rd Class Morse operating certificate and the General phone certificate, for which P & T Radio Inspector Herb Cassie examined us. Morse was no problem as I had originally learned it in the Scouts and had used it extensively in visual signalling at sea. I only operated modern AWA equipment, although on some of the older vessels, they still had spark transmitters!

I eventually left the sea a few years after coming to New Zealand. My intention was that, when I eventually retired, I would take up amateur radio as a hobby. I started studying for the ham radio examinations in 1989 passed the theory examination with a reasonable percentage. I obtained a computer Morse training program and soon recovered my speed. They gave me the call ZL2AOH then and there. Throughout this time and ever since I was guided and supported by Trevor ZL2AKW.

We were in the process of moving house at this time, so I deferred going on the air until after we moved to our present apartment. I had to get special permission from the board managing the apartments to erect an antenna. The antenna is fed by approximately 30 metres of 300 ? high-grade twin core TV cable. The feeder enters the building down a ventilation shaft and enters the apartment through the window jamb in the toilet. The lead terminates in the small bedroom room that doubles as my shack. This antenna configuration works exceptionally well for DX in all directions.

For VHF and UHF radio I have two hand held transceivers, a dual band ICOM IC- W2E and a 2-metre Taiwanese clone of an IC-2 for packet radio, for which I have a magnet-based antenna on the roof fed by a coaxial lead. So working from my shack on the 12th floor of an apartment block I achieved my DXCC mixed and CW in about four years. The next 100 countries are proving less achievable.  I spent one year in Japan while my wife was teaching there. I applied for a licence as soon as I arrived After a couple of months a licence was forthcoming and I was allocated the call sign 7J5AAN.

In the three months I was on the air in Japan I achieved 500 QSOs with 35 countries. While in Japan the local Sanuki Family Radio Club that befriended me and made sure that I could be involved in all of their activities. In Tokyo I also visited JARL HQ, the IARU Regional offices and the annual JARL ham fair. Also in Tokyo I naturally visited the famed Akihabara district that abounds with radio and electronics outlets. On a trip to Korea to renew Japanese visas, I met a few Korean operators and visited an area in Seoul, similar to Akihabara where I saw some brands of equipment never seen outside Korea.

Although I am not an enthusiastic contester, I occasionally join local club members in participating in field day and other contests and usually operate individually from home in the Sangster Shield Contest and Straight Key night. My preferred operation is CW Dxing and occasionally rag chewing with those who are prepared to stop and chat. 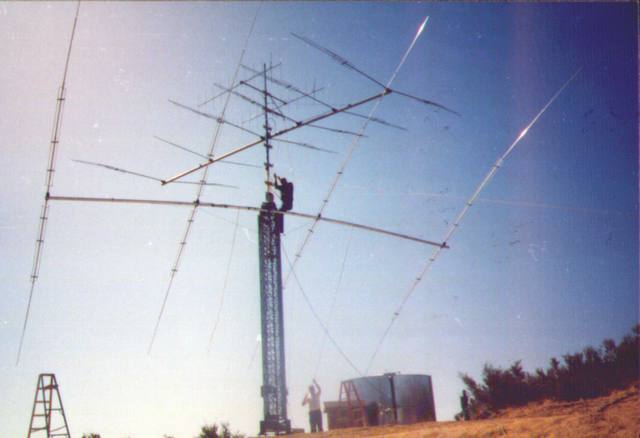 and used to be bookings manager for the use of the site. I am a member of the FISTS Club of the International Morse Preservation Society and act as co-ordinator for the New Zealand and Australian Chapter of the club (FISTS Down Under). I promoted the formation of this chapter in 1988 when there were only four members in New Zealand and Australia. The present number is over 140 and it is growing slowly. This will indicate to readers that my preferred mode of operating is CW. It probably amounts to about 95% of my on-air time.

So, I have had some kind of involvement in radio over the years. Although I have achieved the status of a biological old timer, I still have a long way to go as a radio amateur to be eligible to join the Old Timers’ Club. I wonder if my old 3rd Class WT certificate would qualify me?