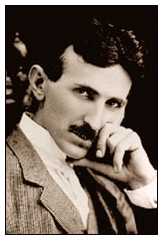 “Sparky” in a thoughtful pose.

I present to you this month’s Dead Electrical Dude No. 2, Mr. Nikola Tesla (i.e. “Sparky”, since he had an affinity for large electrical discharges) Mr. Tesla invented many of the electrical devices and systems in widespread use today. It is interesting to note that the man started out his professional career as an electrical engineer with Budapest’s version of Ma Bell. Tesla’s contraptions and wild ideas resulted in some amazing toys being thrust upon mankind. Note the following highly abbreviated list of just a small sampling of his innovations-

Alternating polyphase current distribution: Tesla’s AC system won out over Thomas Edison’s DC system. In retaliation against his former employee, Edison staged public demonstrations of the lethality of alternating current by electrocuting dogs. If Edison’s DC system had won out, we’d in all likelihood still be in the dark…literally. Imagine huge storage batteries surrounded by fences every few city blocks. Tesla joined forces with Westinghouse and the rest is, as they say, history.

Induction motor: This item is considered to be one of the greatest inventions of all time.
Fluorescent light: Fluorescent lighting is now considered the standard for energy efficient illumination, relegating incandescent sources to secondary status.
Tesla coil: versions of this device are used in your television set’s high voltage deflection coils. These coils are responsible for moving that little electron beam around ever so FAST. Really large Tesla coils can generate impressive artificial lightning bolts. Cool stuff.
Tesla held patents for elementary radio apparatus, in particular, the use of tuned circuits. Marconi built the first viable radio system using technology described by Tesla.
In all, Tesla held 700 U.S. patents for his devices. Note, however, that the inventor did have a weird side. Some of Tesla’s quirks included the following-

Tesla claimed to have received signals from another planet using one of the devices in his laboratory. Sparky never married. How many homely geeks do you know who fit this picture? Tesla also claimed to have invented a “death ray” that could destroy 10,000 enemy aircraft from a distance of 250 miles. We may never know the veracity of this claim, since all of Tesla’s papers were confiscated by the Feds at the time of his death during World War II.

Tesla lived the last 10 years of his life in a two room suite on the 33rd floor of the Hotel New Yorker, Room 3327. Edward Armstrong, the inventor of the superheterodyne receiver and FM, said of his colleague, “The world will wait a long time for Nikola Tesla’s equal in achievement and imagination.” I agree with the late Mr. Armstrong. As a final tribute to the man and his achievements, the unit of magnetic flux density, the Tesla, was named in his honor.