First of all, why 171 meters? Has the FCC opened up the top of the AM broadcast band to amateur PSK-31 transmissions? No, but the HF PSK-31 sub-bands are at least partially related harmonically and a length of 171 meters (562 feet) makes a loop skywire antenna a good fit for most of them. Full-wave loops have won the accolades of amateurs ever since they were first described in 1985 by Dave Fischer, W0MHS (QST, November 1985; The ARRL Handbook). Our antenna, an irregular pentagon strung from trees, is fed directly with 50-ohm coax and covers most of the PSK-31 sub-bands from 80-10 meters with a maximum SWR of about 4:1 without using a tuner or a balun. Its high gain and low radiation angles facilitate working DX.

Our current operating interest is low-power PSK-31 on a number of HF bands. Our objective at the outset of this project was an antenna that would:

After some research, we decided that a horizontal loop seemed like our best bet. We are fortunate in having relatively few space limitations at our rural Coshocton County, OH QTH. Our major constraint was the position and height of appropriate trees from which to hang the antenna.

As a start, the resonant length in feet of a loop antenna can be approximated by dividing 1005 by the frequency in MHz. While it’s certainly not necessary, we simulated the loop using the antenna modelling program MMANA. In addition to optimizing the length, models can predict the SWR, gain, angle of radiation and directional properties of an antenna. Adjustments can be made for antenna height and ground type. Antenna models are similar, differing mostly in input-output features. Most use the “method of moments”; which means the model calculates one antenna segment after the other. MMANA is freeware and can be downloaded from www.qsl.net/mmhamsoft/mmana/index.htm. A demo version of a commercial antenna modelling program EZNEC can be downloaded from www.eznec.com.

For the geometry defined by the location of our trees, we arrived at an optimum total length of 562 feet consisting of five segments of 167, 95.5, 114, 112 and 73.5 feet. The gain, angle of maximum radiation, calculated SWR and actual SWR of the loop for the important PSK-31 frequencies are summarized in the table.

It’s important to remember that all antenna models are simulations; they are not the real thing. Simulators are a great way to learn to fly an airplane. But you can’t actually fly from New York to Paris in a simulator. It’s the same with antenna simulations. You’ll learn a lot about the antenna’s anticipated performance, but you can’t actually have a QSO. They’re the “next best thing to being there” and can be a lot of fun especially when the sunspots aren’t cooperating. More about the antenna’s actual performance later…

The antenna is made of insulated number 14 stranded wire from the local home products outlet. Do not assume that these nominally 500-foot rolls of wire will contain 500 feet! Ours was 18 feet short. The wire is threaded through five “dogbone” insulators connected to the support ropes with 24-inch 125-lb test bungee cords. The support ropes are polypropylene agricultural hay baler twine. This rope is UV stabilized, has 240-lb knot strength and is available from farm stores for about twenty dollars per 6500-ft roll. The only limitation is its low abrasion resistance. Make certain the rope is not pulled back and forth over a tree limb in the wind.

Support ropes were put in place using a slingshot and spin casting rod and reel. A lead sinker, painted orange for visibility, was attached to regular nylon fishing line and launched over the appropriate tree limbs. The sinker was removed and the nylon line was used to pull mason’s twine back to the launch point. Finally the mason’s twine was used to pull up the baler twine. Don’t attempt to skip the mason’s twine step. Fishing line is not strong enough to pull up the heavier baler twine.

Manhandling almost 600 feet of wire is a tad more challenging than dealing with a 40-meter half-wave dipole. To measure it, we pounded two stakes in the ground exactly 100 feet apart and then walked sections of wire past the stakes marking the sections at the 100-foot intervals with masking tape. The completed loop with attached coax was laid out on the ground. The five insulators were threaded on and put into position. Bungee cords were attached between the insulators and the support ropes, which were raised incrementally into the trees. The entire procedure took the better part of a day.

Several accounts of full-wave loop antennas state roughly, ” It was the greatest antenna I ever had until it fell down for the umpteenth time and I got tired of fixing it.” After two initial breaks due to wear against the tree limbs, our antenna has successfully survived a rather brutal winter and spring here in eastern Ohio. Anticipating breaks, we first put in place permanent “lifting” loops of baler twine reaching from the ground to the support limbs. These loops are used only to raise the actual antenna support ropes. Not being under tension, the lifting loops never wear out and you never need to get out the slingshot again if the support ropes break. Having five support trees rather than four facilitates repairs since more of the antenna remains airborne when a support rope does break. In addition, the probability of all of the trees pulling against each other in a storm and tearing the ropes or wire decreases as their number goes up. Keeping the antenna completely free floating in the insulators also minimizes breaks. The wire can re-establish equilibrium when stressed in a storm. This can shift the point where the transmission line is attached, but with no detectable effect on performance.

The proof is in the PSK-ing

As shown in the table, actual SWR, as measured by both our ICOM IC-718’s internal meter and an auxiliary meter, are significantly lower than predicted by the model. At 20-30 watts output, the transceiver shows no sign of reducing power. Our expectation of needing to use a tuner with the antenna was pleasantly eliminated. On the other hand, the predicted high gain and low radiation angles are supported by our operating results.

Loops are known to be great for receiving and this one’s no different. Compared with our other PSK-31 antenna, a 20-meter dipole sized for 14.07 MHz, reception with the loop is almost always at least one S unit better. Noise levels are very low. Short-wave broadcasters, Dominion Observatory Canada at 3.333 MHz and the 60 kHz time signals from WWV all come in well. Even CB transmissions from the truckers on the expressway five miles away come in loud and clear on the IC-718. Some day we’ll have to buy a CB radio and see if we can talk back. Just kidding!

The antenna is great for receiving and “if you can hear `em you can work `em”. PSK-31 stations in Europe,South America, Japan and Africa have been worked regularly. Contacts have been made 80, 40, 30, 20, 17, 15 and 10 meters. Not requiring a tuner makes band switching a breeze. In the MMANA screen prints, the calculated directional patterns have an egg-dropped-on-the-floor look, but are in reality omni-directional. It’s noteworthy that the average height of the antenna is only 35 feet. An 80-meter dipole at this height would radiate most of its energy straight up, but this antenna’s angle of maximum radiation is a DX-friendly 53 degrees at 80 meters.

The simulations suggest that a better impedance match could be achieved on some bands by feeding the antenna with 300-ohm twin-lead or by using a 4:1 balun with the 50-ohm coax, but at the power outputs we’re interested in that’s really not necessary. The lengths of the individual segments could be optimized to favour a specific band of interest. We certainly plan to do some tweaking, but for us this may just be the perfect PSK-31 antenna – for less than fifty bucks and with a lifetime supply of baler twine left over. 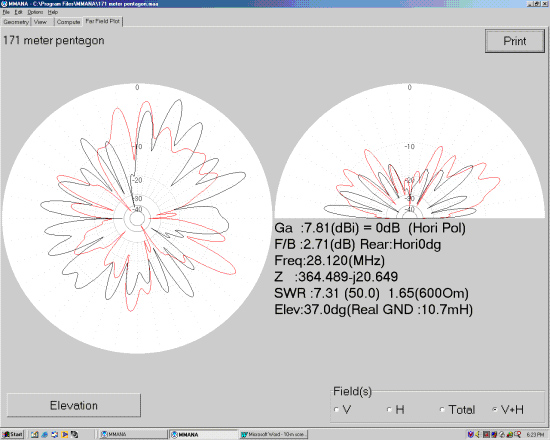 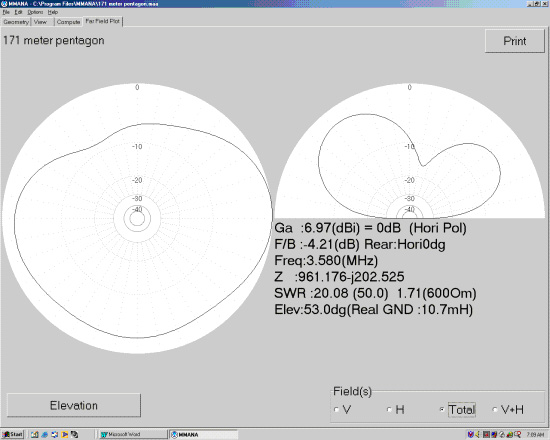