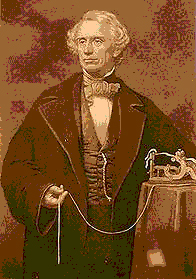 In Memoriam: Sam Morse
I decided to do a short essay on Sam Morse given the recent turn of events. I was all set to write you good folks an article on Ampere this time, but alas, it was not to be. Just think, if Sam’s life had turned out a little bit differently, there would not be a system of communications referred to as “Morse Code”, which is a misnomer anyway. The system of dots and dashes may have been invented by someone else and called Johnny Code, or Algernon’s Code, or Fred’s Code, or Old Code (I love rhymes). In my opinion, the code was so simple that it was bound to have devised by some other lad or lass, and we’d have their sepia portrait at the top of this page instead. I like this picture. Instead of holding a book like our dearly departed Count Volta, Sam is holding a telegraph tape. Why isn’t he looking at the tape? Perhaps he is gazing off in the distance contemplating the future. Who knows? Whimsical speculation on your part is highly encouraged in the maelstrom of postings this article is sure to set off. Who was Morse, the man?

Samuel Morse was born in Charleston, Massachusetts, near Boston. Like many an extremely bright youth, Sam didn’t appear to have any direction in his college studies. He was basically a good kid, and wasn’t prone to wild partying, like our friend Ohm. I suspect that some of his father Jebidiah’s inevitable lectures, while Sam sat on his knee, on morality had something to do with it, as the old man was a preacher. As it was, his parents were not happy with the young man’s penchant for painting. Actually, Sam was quite good at it, and was highly respected in his skills. During his college years, he was fascinated by lectures he attended on the groundbreaking subject of electricity. As chance would have it, in 1832 Sam heard about a new invention, the electromagnet, while sailing back to the good ole’ United States after conducting art studies in Europe. A “Eureka” moment occurred, as Sam believed that the invention could be developed into a means of communication. Perchance if Sam hadn’t overheard that conversation, he would’ve died a poor artist.
The idea of an electric “telegraph”, however, was not new. A competing system utilized a system of many wires and a needle pointer mechanism. The needle would rotate to the letter “a” for instance, when the associated inputs were set. However, Morse’s system utilized only a minimal number of wires. A sequence of long and short circuit closures was assigned for each letter and number; a code, if you will. After further development with the assistance of a couple of partners, Morse applied for a patent in 1837. The new invention caught on rapidly. By 1843, with federal funding, telegraph lines were installed between Boston and Washington, DC. In 1844, his now famous message, “What hath God Wrought”, was transmitted by Morse himself between the two cities.

Sam’s system used an electrically-driven needle to mark the long and short dashes on a moving strip of paper, where they could be decoded. However, much to Morse’s incredulity, telegraph operators soon gained enough skill to the point that they could translate the sounds of the electromagnet clicking directly in their heads, and write the letters down as they were sounded out. A common misconception is that Morse’s code is the same code that is currently in use today by hams worldwide. This is not true. Although they share similar characters, there are significant differences. The International Morse Code retains his name to honor the inventor.

In his later years, Morse was married a second time in 1848 to a cousin and begat more children in addition to those begat from his first marriage. He was quite the philanthropist. Sam gave generously to the art programs at Yale and Vassar Universities, and others, and helped out young artists whenever he could. The wealthy inventor died in pneumonia in 1872 while in New York City.