Verticals for the low bands have classically been an electrical 1/4 wavelength long (tall) and require a radial system for the current return. The exception is the vertical dipole, which is now more commonplace since the development of the SVDA antenna system (see the write-up on K5K) and the new SIGMA series vertical dipoles from Force 12, Inc. When using a 1/4 wave vertical, laying 120 buried radials (as indicated in texts for decades) is rarely practical for most of us; therefore, a different, but efficient approach is needed. 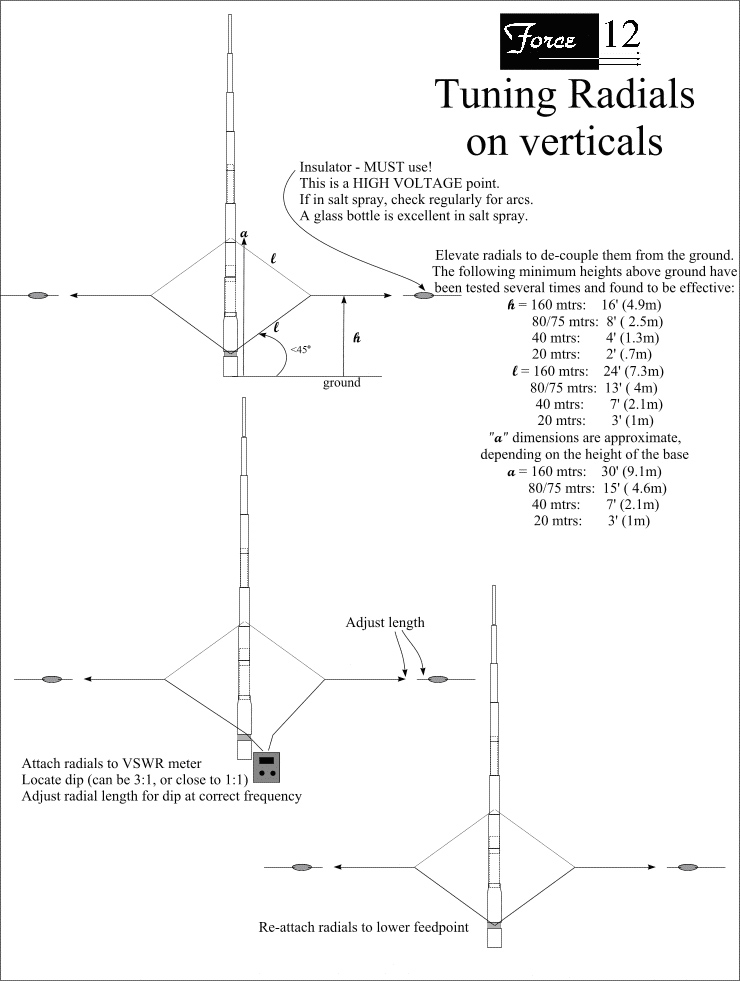 The original concept was discovered in an I.E.E.E. article some years ago where the buried radial systems on commercial AM broadcast antennas were disintegrating over time. Adding elevated radials was shown to be extremely efficient and a practical solution for the current return. The concept was put into practice on our first trip to Jamaica for the A.R.R.L. competition as 6Y4A. It has been used on every installation since that time and on many other installations world-wide.

We had carefully selected the 6Y4A operating site, which was right on the ocean with several hundred feet of beach available for vertical antennas. One of the first antennas we installed was the 160 mtr vertical, followed by the 80 mtr verticals. Since we were on the ocean, we laid the radials on the “ground.” This consisted of a combination of rock, salt water and grass, all right adjacent to the ocean. Conventional “wisdom” would say we had done a wonderful job – hardly. We were unable to have anything close to a 1:1 VSWR, nothing less than 2:1 at best. The team looked to me for an overnight solution (didn’t get much sleep) and my memory was working well enough to recall the I.E.E.E. article. After not much sleep, we got up early and did an important test: when we added the hairpin match to increase the feedpoint up to 50 ohms, the VSWR got worse.

The feedpoint for a full size 1/4 wavelength vertical should be in the low 30 ohm range. Shortened verticals are lower, often in the 12-20 ohm range. We were using physically short verticals with efficient linear loading to load them to an electrical 1/4 wavelength, with an expected feedpoint of less than 20 ohms. When we added the hairpin to transform the feedpoint impedance higher towards 50 ohms for an acceptable match, the VSWR got worse. This meant the feedpoint was already above 50 ohms, which was caused by the added loss (resistance) of the ground. We now knew the problem and we quickly worked out the “gull wing” elevation technique for lifting the radials above ground. As soon as the radials were in the air, the feedpoint impedances became acceptable. It should be noted that even with the poor match (and high losses) we did use the verticals that night, with excellent performance, due to the proximity of salt water. After reducing the losses by elevating the radials, they were even better.

A procedure was developed over the next year to elevate and tune radials. The drawing above shows both the basic technique for elevating radials, as well as the height above ground for effectively de-coupling the radials from the ground.

Any questions or comments, please zip off an e-mail to us at [email protected].