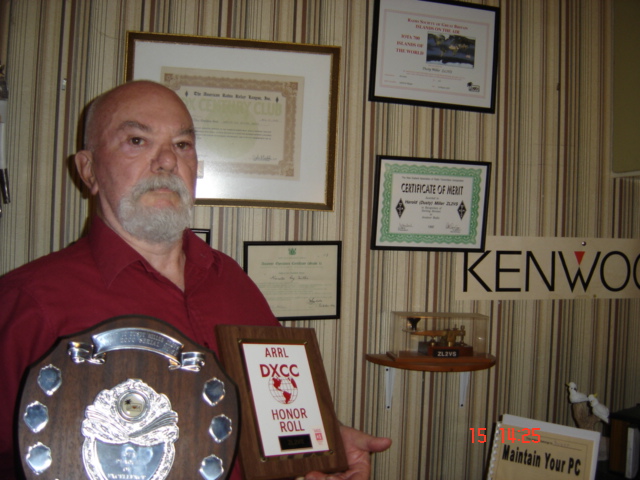 I was born in Lincoln, England in 1934 and at the age of 15 I joined the Royal Navy and trained for 16 months as a Telegraphist  and passed out at 25wpm before going to sea this was very handy as some of the area broadcasts reached 30-35 wpm depending on the amount of tfc they had. At this time , morse was the only means of communication at sea except for a small amount of VHF close range voice so CW became a second language. During my time in the Navy, apart from shipboard operating, I spent 3 years at Capetown Radio/ZSC and 18 months at Singapore/GYL  mostly ship/shore operating 100% cw. When I finished with the Navy I came to NZ and worked for a while with NZPO and then moved to Waiouru at HMNZS Irirangi as a civilian operator and it was during this time that two of my workmates Rex/ZL2ASM and Bill/ZL2VS coaxed me into taking the exam, I passed and received a Grade 1 certificate in 1970 as ZL2AQK.

My first rig was an old ZC1 11 watts of chirp and it took me 3 hours to get my first DX, a VK2, rst 33? if I remember correctly but the seed was sown. I did graduate to an EICO720 40 watts CW TX with a Collins 51J4 RX and a G5RV before I was posted to Melbourne and became VK3AYO with a TS820s and a vertical. Apart from award hunting I got the VKDXCC certificate. I returned and settled in Marton where I at last got a beam and started DX’ing seriously and received my  ARRL DXCC award in 1982.  My original call was re-issued whilst I was overseas but I was lucky that Bill was transferring to ZL1 and I was able to get ZL2VS. I spent many sleepless hours working the rare ones and finally got #1 on the Honor Roll. I then turned my attention to IOTA and before I pulled the big plug for good I received the coveted 750 Plaque from RSGB only the second one in NZ  (Ramon/ZL1ARY was first) and 89th issued in the world. I finished with almost 900 confirmed. I did a solo dxpedition to Chatham Island as ZM7VS clocked up almost 6,000 QSO’s in 10 days 75%cw. I was very happy to give some EU’s their first Chatham contacts. The highlight of my time as a ham was my solo participation in the Cyclone Val affair when I was the only comms in and out of Apia for about 5 days, a very exhausting but rewarding experience. I was very proud to receive the Certificate of Merit from NZART for this operation.

Note from Lee ZL2AL: Dusty achieved No. Honour roll and has now given up Amateur Radio and is into breeding and keeping songbirds