For those of you who seem hopelessly lost with all this solar and propagation stuff, I will attempt a quick primer that will help you understand what happens to your radio signals. 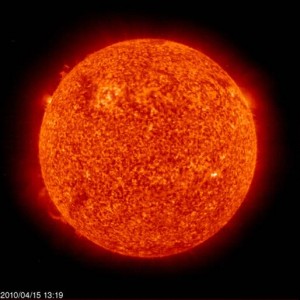 We all know the sun goes through a solar cycle about every 11 years. During the minimum, or QUIET SUN, there are few sunspots, the solar flux is very low (SFI is less than 100), which means the sun’s ionizing radiation is quite low. As a result, our upper atmosphere, where the E and F layers reside, are not well ionized. This means the E and F layers do not reflect HF radio waves very well … and most of your signals will pass right on through to space to be picked up by Jodie Foster in the sequel to “Contact.” One measure of how well ionized our E and F layers are is the MUF, or Maximum Usable Frequency. During the quiet sun, the MUF is often below 15 to 18MHz. This is why 15M and 10M are “dead” during the quiet sun, except for local (line-of-sight) communications. 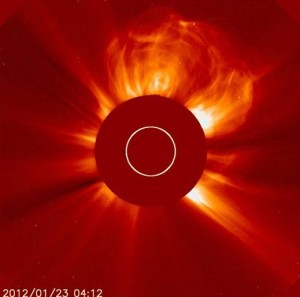 However, during the solar maximum or ACTIVE SUN, there are many sunspots, the solar flux is high, and this highly ionizes our ionosphere. This in turn means our E and F layers become very reflective to HF signals. Virtually all the power hitting the E and F layers will be reflected back to Earth and little ends up in space. This high reflectivity causes the MUF to rise, often to above 30MHz. And when this occurs, 10M will be open all day long to support global communications by using “skip propagation” … in that your signals are skipping (or being reflected) off the ionosphere back to earth.

OK … now a couple of definitions: 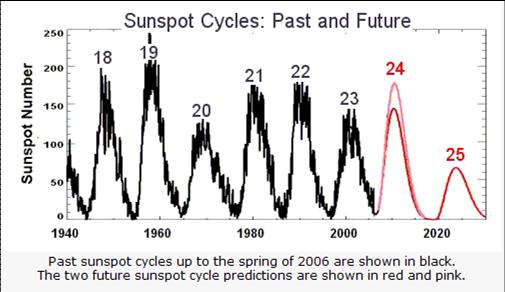 Sunspot Cycles Since the 1940s 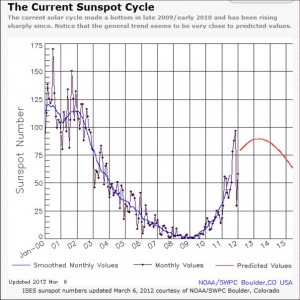 A general rule of the thumb is 10M is open when the solar flux is greater than 150. 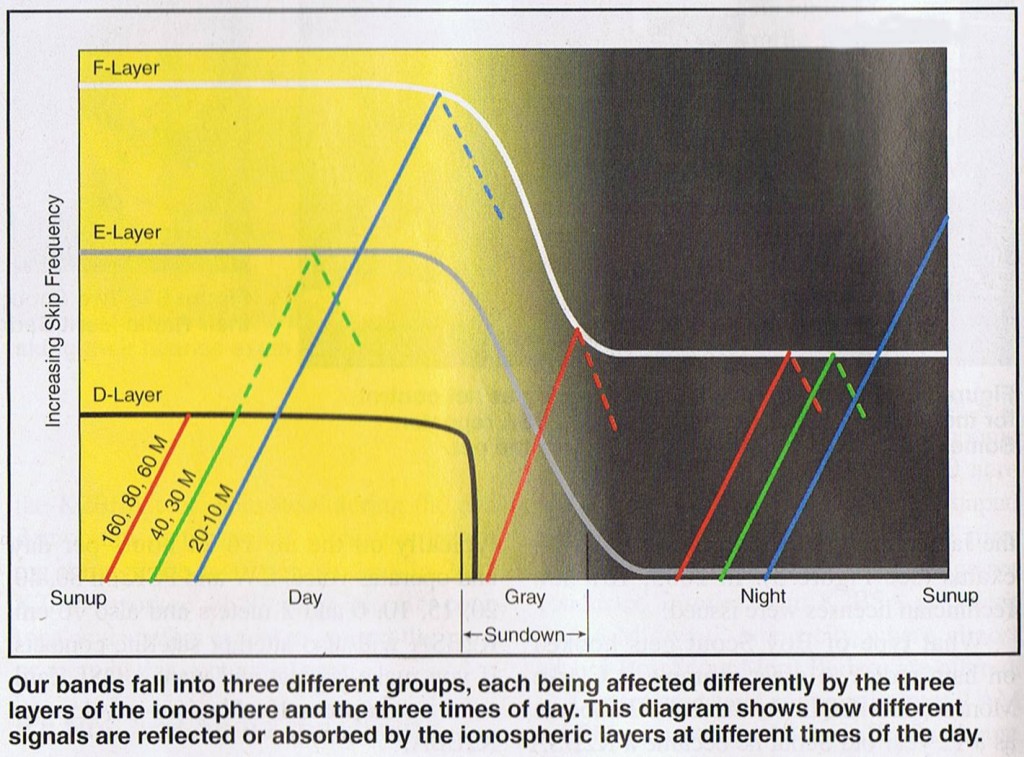 The solar radiation reaching the Earth contains IONIZING radiation. This means the incoming solar radiation can rip electrons away from the oxygen molecules high in our atmosphere. So now you have all these “free electrons” roaming around that makes the upper atmosphere (or ionosphere) more dense. Now the mass or weight doesn’t change, it’s just denser. Think of a bunch of popcorn balls on a floor, and shooting a marble through the open spaces without hitting a popcorn ball. Likely, not hard to do. The marble represents your radio signal passing through to space.

Now go out there and stomp those popcorn balls so a bunch of individual popcorn kernels are scattered all over the floor. The mass of the popcorn has not changed, but it is distributed to make the field more dense. Now try to shoot that marble across the floor without touching a piece of popcorn. Going to be very hard to do. The marble, or your RF signal, does NOT pass on to space. In the real case, your RF signal strikes all these free electrons, and that is what reflects them back to earth … DURING DAYLIGHT HOURS when ionization occurs. 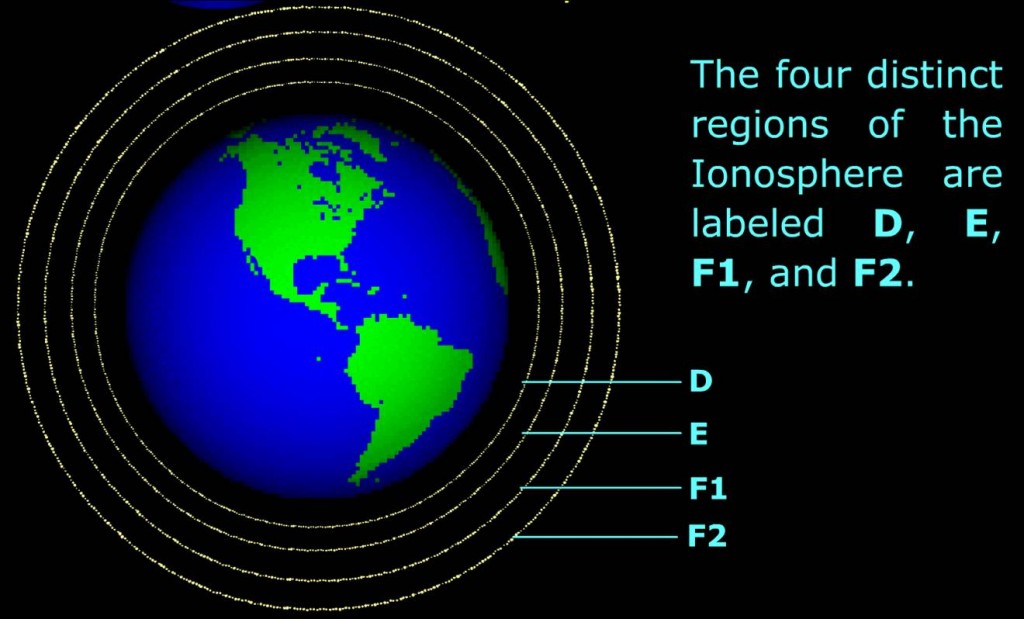 A really amazing thing happens to our ionosphere when the ionizing radiation from the sun goes away (night time), The free electrons rejoin or recombine with their host molecules, making intact oxygen molecules again. In our example, this would be like watching all the popcorn kernels on the floor magically turning back into popcorn balls again. Of course, this means RF signals will again pass through on to space and will not be reflected.

Interestingly, when electrons are stripped away from oxygen, it turns the oxygen molecules into helium. Another way of measuring the extent of ionization is to measure the amount of helium in our upper atmosphere. This is usually done through optical spectral line equipment or launching high altitude instrument balloons. However, this is seldom done today since other means and satellite surveillance is far more superior for measuring the extent of ionization. 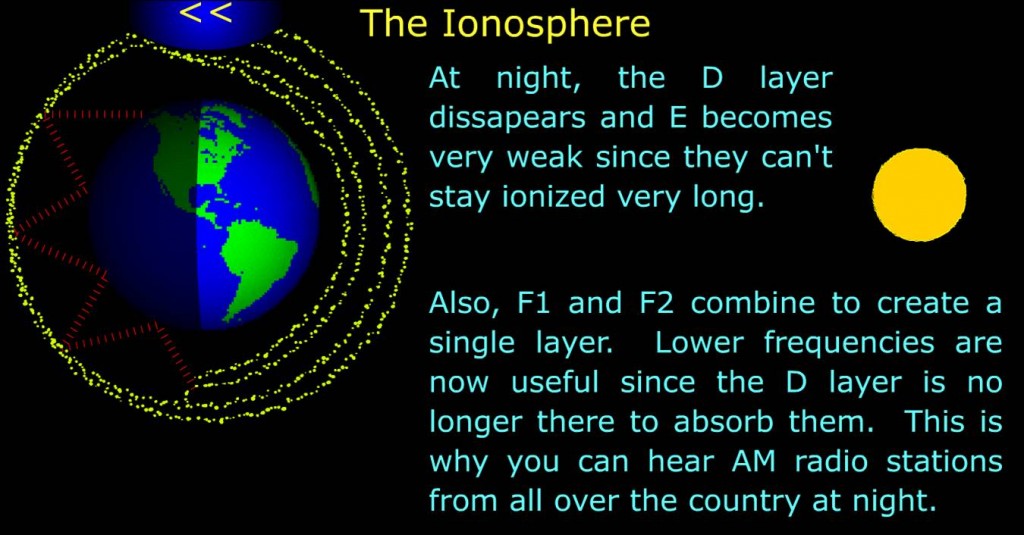 This is why the higher bands, such as 15M and 10M, are open with signals being reflected back to earth during the DAYLIGHT HOURS. These same bands go dead (no reflective propagation) nearly as soon as the sun sets – because the sun’s ionizing radiation goes away.

This is also why these same bands tend to be completely dead during the quiet sun, because there is insufficient ionizing radiation to cause ionization for reflection. This is a phenomenon of the active sun, the period we are well into right now. And, during a quiet sun, the ionization can be so low, that the MUF drops below 14MHz at night, which is why even 20M can go dead at night. During an active sun, the MUF almost always remains above 15MHz even at night, which is why 20M often becomes a ’round-the-clock band during the active sun.

So what about 40M and 80M? The solar cycle has virtually no effect on 40M or below. Propagation on 40M, 80M and 160M remains pretty much the same during the active sun as it does the quiet sun, because the MUF seldom drops below 10MHz. This is why 40M is the main night time band, year in and year out. Even with low ionization, the very long wavelengths of the lower frequencies will be reflected by the ionosphere. This would be like rolling a basketball through the popcorn balls … while the high frequency RF (the marbles) pass through pretty easy, certainly the low frequencies (basketball) would not. Quiet sun or active sun.

The active sun DOES effect 40M in that absorption to RF can be very good to very bad, or very high noise levels from geomagnetic storms … both due to solar flare activity that occurs only during an active sun. A large solar flare sends an extra dose of ionizing radiation to the Earth. This can raise the MUF to very high frequencies (greater than 100 MHz), but this radiation can also penetrate far into our atmosphere to ionize the lower D-layer. RF signals must pass through the D-layer on their way to the upper E and F layers, where the reflection occurs. The more ionized the D-layer is, the more collisions that will take place with your RF signal, absorbing or attenuating some of its power. Thus, high absorption to HF signals can occur during and after a solar flare. This would be like rolling that marble across the popcorn covered floor, which encounters so many collisions with the popcorn that the marble comes to a halt. Now that is total attenuation or absorption. Your poor little QRP signals just vanish on their way to the E and F layers!

80M signals are almost always highly or fully attenuated by the D-layer, and what “propagation” that occurs on 80M is actually by the signals traveling across the Earth’s surface, or “ground wave” propagation. The wave front is confined between the Earth’s surface and the D-layer, which causes attenuation to the power as it travels along the ground, skims the D-layer, and propagates through the dense atmosphere near the surface. This is why QRP on 80M is challenging at best since the absorption rates are fairly high – day and night, quiet sun or active.

The other major effect to HF propagation during the active sun is geomagnetic storms. Very briefly, this is caused by a shock wave from a solar flare hitting the Earth’s magnetic field, causing it to compress and wiggle for awhile. And while it’s wiggling, it’s generating huge electrical currents, which in turn creates gobs of noise on HF. I’ll present geomagnetic storms in another lesson.